In urban areas many common species such as the wood frog, ovenbird, or yellow birch, become uncommon to rare. I have often wondered about the status of the red squirrel in Newton. Red squirrels are common in Massachusetts, and tend to favor coniferous or mixed coniferous forests (see Wild Mammals of New England for a good overview). Twice, I have observed road-killed red squirrels on Beacon Street, west of Newton Center (most recently, on 5/7/07). It's a mystery to me where these squirrels were coming from. I have also observed this species at Kennard Conservation Area. Perhaps the red squirrel is more widespread than I think it is? Please report your Newton sightings of this species as a comment to this posting.
Posted by JR at 5:52 AM No comments:

The yellow warbler is one of Newton's Most striking breeding birds. This magnificent bright yellow bird frequents brushy areas, often near water. This bird can be found in urban areas such as the area in front of City Hall and adjacent to Bullough's pond. However, due to its small size, and the fact that it is often concealed in dense vegetation, this bird can be easily overlooked. The yellow warbler is more often heard than seen. If you are a beginning birder, and would like to see the yellow warbler, I suggest that you learn to recognize its song. It is now peak breeding season and males can be heard singing much of the day. The yellow warbler can be seen readily at Bullough's Pond. There is a male singing at the south end of the pond, along the Commonwealth Avenue footpath, immediately east of Walnut Street. Yellow warblers can also be observed at City Hall ponds, Cold Spring Park, Nahanton Park, and many other areas around our City. Although many of our most spectacular songbirds such as the blackburnian warbler and magnolia warbler are migrants, we are fortunate to have the yellow warbler as a summer resident.
Posted by JR at 6:20 PM No comments:

5/7/07 - Observed Orchard Oriole at northwest end of Bollough's Pond, near the bridge. The bird was observed in some maple trees and witch-hazel shrubs adjacent to the pond. The Orchard Oriole is a magnificent bird, and an uncommon spring migrant in Massachusetts. The spring migration is in full swing. Other birds observed at the pond on May 7 are listed below. I have placed an asterisk next to birds that, as far as I can tell, have returned to Newton within the past few days. 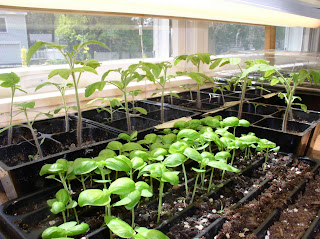 5/6/07 - What could be better than growing your own food at home? Home gardening is a wonderful way for children and people of all ages to connect physically with the natural world. It can be awe-inspiring to go from seed to pounds of delicious produce-- even with very limited available space. Pictured here are our basil and tomato plants, started indoors. Greg Maslowe, Newton Community Farm Manager, wrote a wonderful piece for the Newton Tab on the virtues of consuming locally grown produce (5/2/07). It's surprising how much can be grown on a small sunny patch of land. Last season, we produced about 30 pounds of butternut squash from seeds that self- germinated in our compost pile (on about 60-70 square feet?). We just ate our last garden squash in April.

Newton Community Farm is committed to offering guidance to home vegetable & fruit gardeners, from beginners to experienced gardeners. This year, the farm will be offering a course through Newton Community Education entitled "Gardening and Fruit Growing at Newton Community Farm." This 4-session course (beginning June 30) is specifically designed for people interested in starting to grow fruits and vegetables at home, as well as gardeners who would like to improve their skills.
Posted by JR at 10:31 AM No comments: 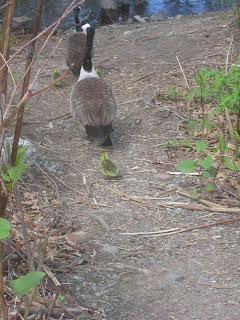 5/5/07 - Charles River Path, near Newton, Watertown, Waltham line.
Photograph courtesy of the Glasgow family.
Posted by JR at 10:26 AM No comments: 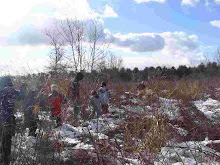 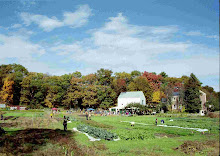